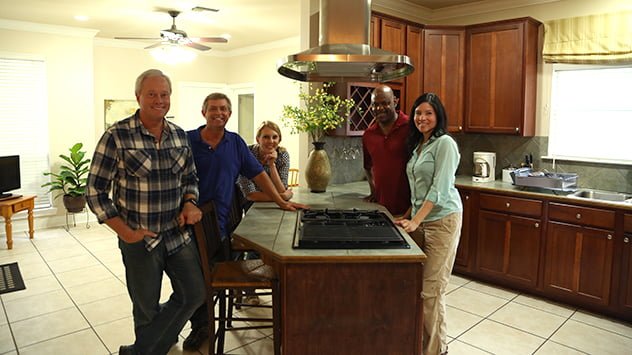 MOBILE, AL (April 10, 2015) – Expert Home Improvement Guru Danny Lipford is taking his 17 season, Emmy-nominated television show – Today’s Homeowner, on the road to film on location in Hahnville, Louisiana. Danny and his crew will be shooting a “Honey-Do” episode the week of April 20 at the home of local Hahnville residents, Jerry and Anissa Arnold. Broadcasting nationally and drawing a weekly audience of 1.5 million viewers, Today’s Homeowner with Danny Lipford currently airs on regional partner stations WWL in New Orleans and WAFB in Baton Rouge.

Jerry and Anissa Arnold are the lucky winners of a national “Win Danny and His Crew” contest sponsored by Today’s Homeowner and partners Broan NuTone, Leviton, and Titebond. Over 3,000 contestants from all 50 states submitted “Honey-Do” lists in hopes of winning the opportunity to have Danny and his crew at their beck and call. The grand prize also includes up to $1,000 to spend on materials needed to complete the repairs and upgrades on Anissa’s list.

Some of the specific projects that Danny and the team will be tackling include:

Danny comments, “So many people are intimidated by DIY and home improvement projects. We’re always excited to show our viewers how easy it can be, and working with Jerry & Anissa to tackle some of the things around their home will help illustrate that. We are thrilled to be shooting on location in Louisiana, especially during crawfish season!”

The Today’s Homeowner episode featuring the Arnolds and their “Honey-Do” improvements is set to air the week of May 18, 2015.