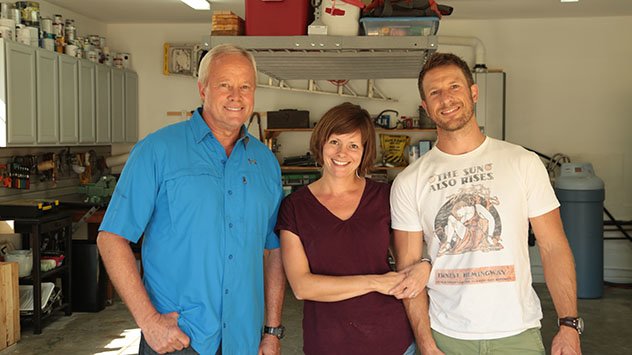 MOBILE, AL (June 23, 2015) – Expert Home Improvement Guru and National Media Personality Danny Lipford is taking his 18 season, Emmy-nominated television show – Today’s Homeowner, on the road to film on location in the greater Indianapolis area. Danny and co-host Allen Lyle will be shooting a “Garage Makeover” episode the week of July 27 at the home of a local Columbus, IN couple. Broadcasting nationally and drawing a weekly audience of over 1.75 million viewers, Today’s Homeowner with Danny Lipford currently airs on 205 TV stations.

Bajorn and Courtney Gaylord of Columbus, IN, are the lucky winners of the national “Get Your Garage Back” contest hosted by Today’s Homeowner and sponsored by TORO. The couple submitted a photo (left) showing the current state of their garage and pled their case for a makeover. Courtney commented that her husband is a handy guy, but his workshop space has been taken over by the clutter of their daily family life and activities. Kid’s bikes, out-of-season clothing and boxes of books awaiting storage are just some of the items that need to get out of the way so they can reclaim this valuable space.

As winners of the contest, Allen will work with the Gaylord family to create a plan for their garage makeover and implement the prize package from TORO valued at over $8,000.

In addition to winning the contest, Danny and Allen will feature the family’s garage project on an episode of Today’s Homeowner. Some of the specific projects they will tackle with the homeowners include:

Allen comments, “The garage is one of those spaces that can easily become a catch-all for many homeowners. I’m looking forward to helping the family clear the clutter and showing them how easy it can be to install efficient storage solutions. As a fellow handyman, I’m also ready to help Bajorn reclaim the workshop space he’s been missing!”

The Today’s Homeowner episode featuring the Gaylords and their “Garage Makeover” will kick off the 18th season of the show and air the week of September 14, 2015.